Yep, always something around here.  Started off Friday night.  The husband was on his way home from work.  I was in bed when he came in.  Heard him on the phone asking for a local town's police department phone number.  Well, that peaked my interest!  Of course, not enough for me to get out of bed.  But he eventually came in the bedroom and I asked what was going on.  He said a neighbor about 2 miles away had a huge fire burning.  Okay, it's very windy and we are in a drought.  Not to mention the burn ban.  The husband said he initially thought it was their home.  The fire was so large and the flames were 20 ft high.  He didn't see any lights on at the house and didn't see anyone by the fire so he thought he better call it in.

Problem with that, we live in the corner of three counties.  He called one county.  They old him to call the other.  So he did.  Got the sheriff dispatcher.  He was explaining the situation with her when she decided she needed to take a personal call.  He sat there listening to her on another phone, then say, "hold on, I need to get back to this 911 call."  SERIOUSLY!  So he tried to tell her where the fire was.  She couldn't figure it out.

We tried calling the local PD for the town that's only about 5 miles down the dirt road.  Well, no after hours phone!  Yea, you can only speak to the cops between 8-5!  Ugh!  Finally, about 40 minutes after the initial call, a fireman called the husband.  He was trying to find it.  He was not at the right place.  The husband gave him directions.  There were two fire trucks coming from towns over 20 miles away.  There are two volunteer fire departments within 5 to 10 miles of the fire but I guess since they were in the wrong county?  Who knows.

I tell the husband I want to go see the fire.  So we get back in the truck and head over.  Fire is still burning.  It's not flaming like it was but again, the idiots should not have been burning AT ALL!!  No law enforcement there.  It had been over an hour since the husband called it in.  We came back home.  As we went to bed, the husband said, "well, now we know.  If we have a fire, get what you can cause it's gonna burn to the ground before anyone will get here."

Then we woke up early Saturday.  The husband and I were having his warehouse crew to our lease for a fishing/pizza party.  They had done really well at work and this was their "reward".  About 20 people were expected when he took a head count on Friday.  I went to town and picked up the pizzas.  He brought drinks, bought horseshoes and washers.  Guess how many showed up?  TWO!!!!  I couldn't believe it!

But the two that did show up enjoyed themselves.  They had never fished before!  That's just so crazy to me.  Twenty-something year old guys that have never fished.  The husband showed them how to use a fishin' pole.  They wouldn't take the fish off the hook.  The husband was running around taking care of them.  He said it was like fishing with little kids.  At least the fish were biting.

This was my catch... 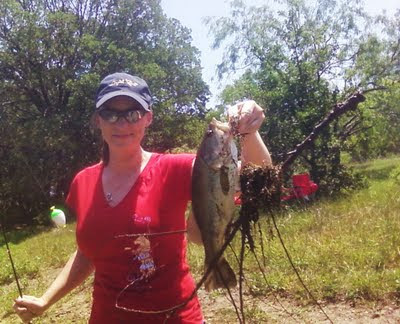 The stick and moss were an added bonus!

Then came Sunday.  We were having a nice relaxing day.  The husband let me sleep in.  Then he cooked me breakfast.  I asked if we could go to town for lunch.  We got ready and headed out.  Made it about 10 miles down the road when the neighbor called to say we had cattle out in the wheat field next to us.  Geez louise!  So I turned the truck around and raced home.  The neighbor had pushed them into our drive and closed our front gate.  They were contained when we got there.  We got them and all the others penned up in the small pasture.  We're gonna have to do a good examination of the fences before we let them back out.  UGH!

So how was your weekend?
Created by The Wife at 6:41 PM

Lol, I don't know what's in the air, but it's something. You've got some great neighbors there!
The fire though, that's very scary. I'd be pretty upset by the lack of response in that area. That's alarming.

That is pretty darn bad when you can't even get a hold of the police for a fire and then no fire department within hollerin distance! I sure hope you have lots of hoses that are connected to the water supply! I would be really bummed about only two out of twenty for a party showing up. I guess you had lots of leftovers to snack on ;) Fishing is always an attention getter! I have heard of not putting the worm on the hook but not taking the fish off, Now I have heard of everything. You two need a cattle herder ;) Hope things go better during the week!

Aside from Skeeter getting skunked I would say my weekend was pretty good.Amazing that someone would have a burn in drought conditions , but they do it here too. Scary about the emergency response too ,personal call in the middle of a 911???

That's a little too laid back; personal calls on a 911, passing the buck for fire response....
Nice fish!
My weekend was pretty tame compared to yours.

i hope you never have a fire! and I cant believe grown boys haven't fished...we can wait to get the babes and go do some fishin! we started taking them to Michigan every year and they love it..happy week to you.

Our local police department has a phone outside..if it's after hours, you use the phone to call the cop on duty. Crazy!
I'm glad the idiot neighbors didn't hurt anyone...how stupid!

Goodness. Thank God that fire wasn't helped by the wind. :/
The stick was a hungry hungry branch trout, and the moss was a green bass. ;-)
We caught bass, too, and some pan fish. :)

Sad that only two people showed up. I would love to work for someone who showed their appreciation like that. :-)

Haha on the guys that can't fish. Of course, we have sons that probably couldn't either; but it's not for lack of trying!

Happy Tuesday to you all!

good grief...I guess crazy things happen to us all. I hope there isn't too big of a hole in the fence cause well I hate fixing fence....and I don't imagine you guys like it any better!

haha I really haven't been fishing either.... :)

And yeah that sounds like a typical day on a farm!

I feel ya on the fire danger!!! We are in the same boat between two counties the trucks would have to come 30 miles to get to us! I smell smoke and I turn on the sprinklers!!! And the way things have been burning up here I run my water every night. A scary feeling!