I always get questions about the "box" on the bull's back when I post buckin' pictures.  I happened to take a great picture showing exactly how it works.

First we call the "box" a dummy.  We use the dummy on young bulls that aren't rider ready.  We begin bucking with the dummy as soon as the calves are weaned.  Of course, they come in different sizes and weights.  Mostly it simulates weight on the bull's back.  But is also allows the flank to be pulled off.  See below.... 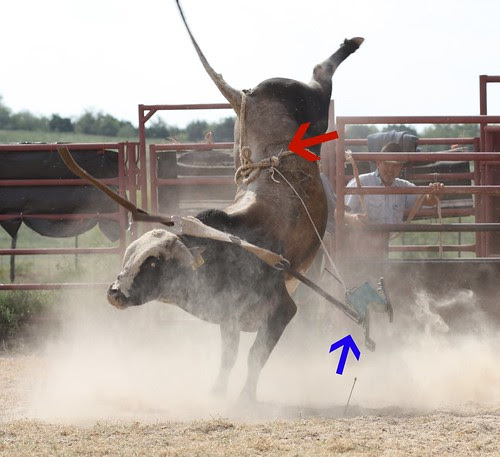 The red area is pointed at the flank.  You can see the pin running thru the flank.  When the dummy (blue arrow) is released by remote control, the weight of it coming off pulls the pin from the flank.  It automatically releases the flank from the bull thus he will quit bucking.

You may ask "What's the big deal about getting the flank off?"  Well, some bulls or heifers (cause we buck them too) buck so hard they could hurt themselves.  If they come out of the chute and really buck, the dummy is released very quick.  If you don't, they could break a leg or pull a muscle.  So usually, the dummy is only on the animal for a few seconds.  Just long enough for the stock contractor to see what the animal is capable of.

Now they are working on a contraption that would replace the actual bullrider.  Stock contractors are increasingly having problems finding bullriders to get on their bulls for practice.  We need to buck older bulls but when there's no one to get on, it makes for an impossible situation.  But like I said, that's currently a work in progress.

So did that explanation help?
Created by The Wife at 7:17 PM

Very good explanation! I never knew exactly what the box was, I guess I thought it was some kind of sensor or something.......LOL!

I need a dummy to ride my colts. Invent that shit for me, would you? Id get a lot more done around here

Makes perfect sense. Thank you for answering the question!

I imagined it was some kind of elaborate electronic item that measures the intensity of the bucks...like Earthquake magnitude!

Awesome! I've only seen bulls buck at the rodeos. I didn't know you had to practice them. Wow and i grew up around all this stuff... I need to get out more :)

great pic to explain. I asked too awhile back. LOL

Interesting. I've watched bull riding on TV, but never really knew all that went into it.
Thanks for the explanation. :)

I think they oughta put a monkey on the bull's back...that would be exciting, at least for the monkey!!!

Super, I got it. Thanks.

Just stopping by to say hi....yes...I had an idea of what it was...but you explained it perfectly! :)