Fate? You Be the Judge

The husband's company is doing a United Way campaign.  The corporate office said if the husband's location completes 50 hours of community service then they will donate $1000 to the United Way.  The husband asked his crew to help complete some hours so this morning they went to do some volunteer work.  Guess where they arranged the volunteer work?  The local no-kill animal shelter.  I was pretty excited for the husband to go there.  Mainly because I would love to do volunteer work there but I can't handle it.  Seeing all the dogs makes me so sad.  I just want to take them all home.  Then I start crying and from there it's an ugly mess!

I waited to hear from the husband while I worked today.  During my lunch hour, I hopped on the shelter's webpage to look at the doggies for adoption.  I scanned thru 60+ listings.  One jumped out at me.  There was just something about his picture. 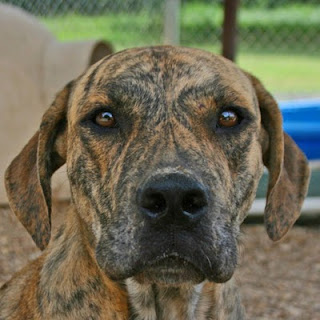 His name is Chance.  He's a coon hound mix.  Just over a year old.  Neighbor shot him prior to him being brought to the shelter.  You know I'm a sucker for a mistreated dog!  I sent the husband an email about the dog and asked if he happened to see him while he was working.

"You are not going to believe this.  I had to work in that dog's pen today.  Everyone else was scared of him but not me.  He acted mean but he was real sweet, he really liked playing.  Heck, I even got him to help me pull weeds.  That is just too wild that you sent me a picture of that dog."

Can you believe that??  Of all the dogs for adoption, I picked the one that the husband worked with today.  He said everyone was telling him he needed to adopt him cause the dog seemed to really like him.  Of course, the husband said he already had four dogs.  Whatever!

I told the husband that every dog deserves a home.  And this one reminded me of Lucky.  I bet he just wanted to be loved.  The husband responded, yea, he did just want loved on.  Awwwwww.  That tugs at my heart.

No, we don't need another dog.  But it kills me to think this guy is sittin' there waiting for someone to love him.  He is at a no kill shelter, however, I have been told that the no kill shelter eventually takes the pets they can't find homes for to the humane society, where if they aren't adopted there, they are euthanized.  Again, reasons I can't go to shelters.  I'd run the isles opening gates, yelling at them to load up!  Could you see me, the crazy dog lady, making a run for it with dogs hanging out my truck?!

I don't know what the future holds for Chance.  But I think it was fate the husband and I both found him today.  What you think?
Created by The Wife at 6:46 PM

Oh he is just beautiful, those eyes speak volumes! Maybe, if you arent being led to actually adopt the dog, you can help him find a good home through your blog/people you know?

Ahhhhhh!!! Me sees a new pooch for the Crazy M!! He's darling! I wonder how he does with other dogs??? I can't wait to hear if he joins your crew!

I know how you feel. I'm the same way about cats and animal shelters. And some of the dogs, too. There's just no way I could take them all home and most of the shelters around here are run by the humane society. :/

I agree there was a reason that you and the husband noticed the same dog; but only you know if you could afford another dog.

Sooo, any bets on how long it takes Chance (love the name by the way!) to make his way to the Crazy M? I say 3 days.

I would be happy to ride along with you. Tugs at my heartstrings.
Brenda

Oh boy!
I see a new dog coming to the Crazy M!
I'll be expecting to see pics of him at home with you two real soon!

I think you're married to right man. I think you and he must be very close to have that happen. I think I love you both for your kind hearts.

Have you ever thought of helping dogs find good homes (not just your's I mean)? You have such a passion for them. Wouldn't it be fun to work at something you feel that strongly about?

You have quite a blog following, maybe some of us could help.

George? Give up and go adopt him tomorrow! ROFL

We'll just have to wait and see what the future brings, hmmm?
Is it just my overactive imagination or my tender heart talking... But does "Lucky" and then running across "Chance" mean something deep and meaningful?

It's a sign I tell ya! Fate is there for a reason. Chance needs YOU guys!

Those eyes just bore though you! I hope I get to see lots of blogs about him! (hint hint)

West Side of Straight said...

Oh, I'm like you. can't resist those eyes, and sooner than you'll snap your fingers, he'll be in your truck on his way to your house. If not, I hope someone like you and your hubby takes him home.

I think it is not really about you--it is about the dog. And with what you have been through pet wise this year, you deserve him

Me...I think you have a heart of GOLD!! I think it's amazing that you picked the one dog that your Hubby was in direct contact with!! Fate for sure :)

And really honestly your Hubby has a heart of gold as well! You two are really great for each other! And the animals who need you!

I think I will stay out of this one. (but he sure does look like he's trying to say something!) Like children, it is sad to know that there is millions of abused creatures out there in this world!

Our #4 dog is a 200# English Mastiff that was found tied to the fence in a ditch. Someone had shot her in the head and left her for dead! She only weighed 87#'s and was almost dead.... She has turned out to be the most loving dog and 100#'s bigger now!
You'll know if he's for you!
Tisha

As someone who believes that everything happens for a reason, I'm all "GO FOR IT". I used to volunteer at the Humane Society and even though it was hard, it was nice knowing that every little bit of time I spent with them helped them get more people-friendly to be more adoptable.

My husband and I have 3 dogs. One being a shih tzu mix we rescued. He is precious!

I can't go to shelters either, it breaks my heart! And, like you, I'd end up with every single one of them in my pickup headed toward my house!!

I definately think it was fate that you and husband both found Chance! After all, maybe he just needs...a chance! :)

Wow, that's crazy you picked the dog he was with! I'm thinking the husband needs to let you have another dog just for that very reason :)

I think Chance has already decided where his new home's gonna be ;) The question now is how long is it going to be before he settles in there?

This morning as I was driving my neighbor on her errands out in the boonies between towns, we met a springer spaniel runnung hell for leather up the middle of the road in 90 plus degree heat. Just running blind. I wondered if he'd been dumped or if he'd escaped from a yard. One thing for sure, he was trying to catch his person. Forty minutes later we came back the same way and the spaniel was at least 3 miles further, still running flat out down the yellow line, breaking his wonderful dog's heart, trying to find his person.
Go get the dog, please

"Could you see me, the crazy dog lady, making a run for it with dogs hanging out my truck?!"
Actually, yes! LOL! Those stripes on him are awesome! Don't you have a bull that color?

Five is a very reasonable number of dogs for any family. We usually have five but are down one now. And I am literally dreaming of border collie puppies every night....Five is a good number. lol