Have you seen this kitty? 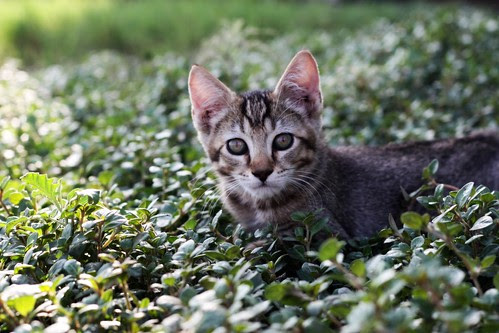 Cactus Jack is MISSING!  Can you believe it.  I name him, now he's gone!

I didn't see him when I left for work this morning.  It was strange cause he's usually around.  But I just figured he was in the barn.  After work, I called the husband.  He asked, "Did you see Cactus Jack this morning?"  Why no, I didn't.  He said he wasn't around when he left for work either.  He looked all over for him, called for him, couldn't find him.

So I got home this evening and searched again.  No sign of him.  Looked around the barn, outside the barn, under the hood of our vehicles, in the yard, nothing.  Called the husband back and told him he still wasn't here.  Of course he said "I knew we shouldn't have named him!"  Then, "He was sure a cool cat."  Can't believe the husband actually thought he was a cool cat.  But he really was.

Husband saw him when he came in from work last night around midnight.  Don't know if a hawk got him during the night or if he wandered off, or if he'll just show up?  I told the husband I just need to stick with puppies.
Created by The Wife at 6:25 PM

Our favorite 'friendly' ferrel kitty {we had three} disappeared one night....of course she was the only one out of the three that we could pet and wanted to be around humans. Hope your little guy turns up...

Sorry to hear this, maybe he wandered off , but ? Barn cats are funny things , some of them stay forever and others...

*hugs* I can feel for you. We're cat people ourselves.
I hope he shows up again.

I hope he's just wandered and makes his way home. We lost our cat for three days only to find he'd been locked in a neighbor's garage by mistake.

Ackkkk! What is with that country side where you live?

Poor Kitty, I know, it's tough out there, maybe he will show up in a few days.

I worry every time we let Bootsie outside, the raccoons, the cars, the dogs..... poor kitty.

When we move upcountry, he is staying IN!

Maybe an owl, hope not.

yep, shouldn't name em. I have probaly had 30 kittens vanish in the last two years. It is usually after I take a pic of them. :-(

Ahhhh... darn it anyways! -- I will keep an eye out for him - Cactus Jack what a wonderful name! You never know he may have hopped on the UPS truck -

Aww MAN!!! I hope he comes back!! You really did give him a cool name too!

I am keeping all fingers, toes, paws, and hooves crossed the Cactus Jack turns up. I just LOVE that name!!

I hope you find him.....what a cute kitty. I'm always afraid that something is gonna get my critters at night when we are sleeping

awe, that sucks! Maybe he did what my dog did the other day. We were at my MIL's and Bear came up missing. we finally had to leave and went back 6 hrs later and he was waiting on us like, where'd ya go without me. We called for him for 15 minutes, my MIL called for him after we left for about 10 and no sign of him.... So hopefully he just wandered off and he'll be back!

oh no! Come back Cactus Jack!

Maybe he will show up, just out looking for company.

DANG IT! Is right! He is so durn cute! I hope he will show back up safe and sound!