A Stranger Among Us

I came home this evening to find a dog at the end of my drive. Initially, I thought it was Diesel and he had managed to get out of the fence somehow. But as I got closer, I realized it was a dog I hadn't seen before. I stopped after I pulled into the drive and tried shooshing it away. I thought it may be the neighbor's dog and it would go home.
I went on up to the house and changed to do the chores. Came back out and saw the dog laying in the pasture. I let the kiddos out of the yard and noticed they didn't pay any attention to the dog. Very odd. So we did our chores and I kept an eye out to the pasture. The dog never moved.
Finally, I walked back down the drive and stood at the fence. He still laid there. And the kiddos didn't pay no never mind. 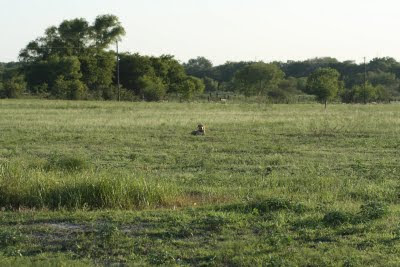 Finally, Diesel decided he needed to check it out. As soon as he headed out, the girls followed. 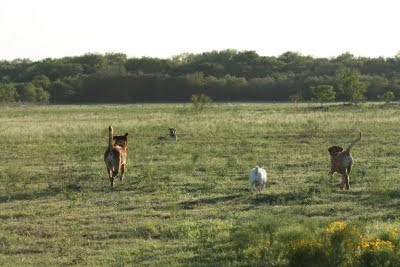 The kids advised me that the stranger was okay. 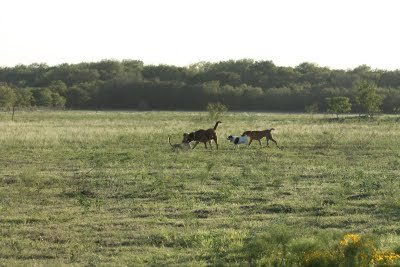 I called the dogs back and went about my business. The stranger stayed in the pasture. Then I put the kids back in the yard. I turned to see the stranger had come up to the barn so I went to check him out.
The first thing I noticed is he was EXTREMELY timid. See the submissiveness he showed just when I walked up. 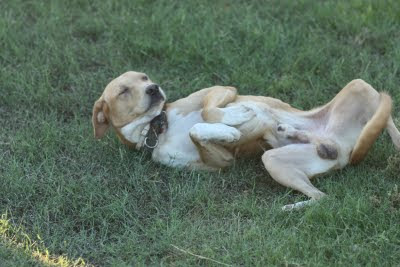 Then I could see that he was skin and bones. His ribs and hips were poking out. And something had happened to his right eye. I think he may be blind. It was real cloudy and had scars around it. He also had some marks on his body. 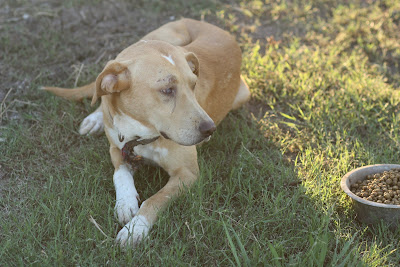 I really don't know where he came from but he belonged to someone. Has a collar and flea collar on. The collar is pretty ragged out. No tags. But he hasn't had any groceries in awhile. So he got a bowl of food and some belly scratches. Don't know what the husband is gonna say. Well, I do, but I don't listen anyhow. If a dog needs help, I'm here to help it.
Created by The Wife at 7:00 PM

Poor old man. Could this possibly be an addition to the family?

Haha my verification was Trigr. Like the horse, just not spelt the same.

Oh! Just breaks my heart! The poor thing! Thank you for giving him some groceries.

Poor thing....but I'm sure he will be just fine in no time at your place! Good luck on both...the dog and your husband!

Awww... what a sweet lookin' old boy!
I don't know what you're going to do, but I know what I would be doing! Feed that boy up, get him on his feet again and then either find him a good home, or tell the others to move over... 'cause there's a new dog in the house.

And give him a belly rub for me, will ya?

Aww, what a pathetic dog! Good for him that he found your house. Tell the husband that if he showed up all skinny and submissive that you'd let him in too! (heeheeehee)

You are such a good person to help him out. It tears me up that people throw away or abuse their pets

This is why I wish dogs could talk or I could understand doggie words - poor guy looks like he has been around and could use a helpin' hand. Wonder how long he has been pokin' around especially since your dogs didn't mind him... He might be an old stranger to them....

Awww, he seems like a sweetie! He belongs to someone, but it may be you now :)
God Bless you for taking him in!

How lucky he found you !

He's very lucky to have found you! I hope all goes well with both him and the Husband. If he gets to stay he's gonna need a big strong name....Our new furbaby was a stray when she was brought into the shelter so no one knew her history or even her name, all skin and bones and in pretty rough shape....now she's formally Augusta but she's Gus unless she's in trouble.

He sure looks sweeet! I think he landed in your pasture for a reason!!!

Oh! That breaks my heart, that he was just wandering around. I hate to think what happened in his life.
Can't wait to hear what you are going to do?

WOW I agree that dog was lucky to have found you! That is so sad how it hovered at the ground like that... Poor thing, please keep us updated on what you do with him. Poor guy..

Proud of you...when there is a need, you supply it. It shall come back to you.

He new who to go to for help:) You sound like alot of us wives, don't listen well! He,he,he

You are such a good mama! I don't have the liking for dogs like you. I was intimidated several times when I was young so strange dogs make me nervous. But I think I could have loved up on this one!

I would do the same thing! We actually have a neighbor's dog living with us. A big chocolate lab. We took him home numerous times during the summer but he always comes back. His family is not home much and we always have someone here working around the yard or kids playing in the yard.

aw sweet little thing came to the right place to get some love! give him a belly rub from me if you can!

Poor little fella with an intact reproductive set of organs.......LOL! Yep, what's another dog. That is why you live on a ranch right?
Maybe someone has been missing him for awhile or perhaps not. Either way I know he is in the best of care now!
He looks like such a lover too!

Animals in need usually find the "right" person for help. Tell hubs that he followed you home. LOL

The best dog we EVER had chose us. He shoed up in our yard, same type shape and would not leave. He was herding kidst from the driveway the first day. I the kids were outside & he did not know you...stay in the car/truck. he never bet anyone but was a wonderful, faithful & loving guardian for our family

He's a cutie...whatcha naming him *wink*

So are we, we even feed the squirrels.

I hope you can find his owner soon.

Lovely history! I am glad he stay with your family.