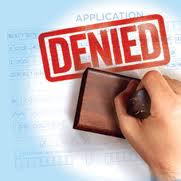 Yep, we were denied for the adoption.  I still hadn't heard anything from the shelter by lunch so I sent the contact lady an email asking about the status.  She called me back.  Said we were denied because I don't have my dogs on heart worm preventative.  Apparently, as she put it, that's a "deal breaker."  She also made a reference about not having a fence.  Which I wrote on the application that I HAD a yard fence.  It even asked for details regarding the fence so I put it was a pipe top rail with welded cow panels.  I'm guessing the city people didn't have a clue what I was talking about.  I didn't bother to correct her.  It was a lost cause at that point.  Their minds were made up because of the heart worm medication.  So Chance won't be coming to the Crazy M.
I called the husband to tell him.  He asked if I wanted him to "give them a call."  He wanted to tell them what he thought.  I figured it best that he not.  Wouldn't help anyways.  They have their ways.  Just like when he went to volunteer.  They wouldn't allow his guys to walk the dogs because they hadn't went thru "their" dog walking class.  Wouldn't even let them move them from one pen area to the other cause they weren't trained.
I told the husband the only reason I tried was for Chance.  There was no other reason I would have dealt with these people.  Especially signing over that they can come to my house, check my vet records and everything else intrusive they wanted to do AFTER we adopted him.  But I was willing to do it if it meant giving the dog a good home.  Fingers crossed that he eventually does find one.
The husband said if I wanted another dog, he would make sure I got one.  Isn't he the sweetest.  That's when I told him I already found a sweet girl at the Humane Society.  ;o)  He just laughed and said how did I not know that was coming!
So I actually went to the local Humane Society after work today (yep, I managed to walk the isles without opening all the gates).  I saw a cute girl on their website.  Thought I'd go by and check her out.  Got there and guess what, she's not there.  She's helping the local college with their vet tech classes until NOVEMBER!  So we'll wait and see.  Maybe she'll be my birthday present!
Created by The Wife at 5:58 PM

...and they wonder why they can't adopt pets!!! Pretty pitiful restrictions and very invasive.

I would love to be a dog at your house!

Sorry to hear it! You'd have given Chance the best kind.

You mentioned that the no-kill shelter (allegedly) turns the animals that aren't adopted over to the humane society... so, maybe keep an eye out for a second chance @Chance.

Dang! I looked into rescuing a border collie today...time to start looking for a young dog...and we could never quality, despite being serious dog people. Fences, home visits, etc. etc. I will just buy a pup I guess. It is really easier, but I thought it would be good thing to give an unwanted dog a home instead.
I am sorry about poor Chance and I hope somehow he gets a second one...chance that is. He sure would have had a happy home with you folks.

Kit I'm so sorry, but I have to say I'm not suprised. Those people get on my nerves. I shouldn't lump them all together, cause I'm sure there are some good ones, but.........

I can't wait to see pics of the little girl! That would make a good birthday present!

Hugs, Kit .I hope Chance finds a good home in spite of the shelter's foolishness.Can't say anything else right now as it would certainly not be my best use of the language!

I have to agree with the Goodwife. It's sad that there are numerous homes that try to adopt pets only to be turned away for some ridiculous reason! Crazy.

I can't believe that they would decline an adoption, knowing that he may not ever have that chance again!!
Our shelter makes sure that all shots/treatments/spaying/ neutering are done, by doing it themselves (so the fee for adoption can vary) which then allows us to adopt... and then they send us reminders for shots, treatments, yearly registrations etc.
Any reminders that AREN'T followed up on, earn you a hefty fine.

I'm so sorry to hear this..makes me sad. Like I stated in my last comment...why oh why do they do this? Hoping Chance is placed with another loving family.

You know you can do inexpensive heartworm prevention with cattle and swine ivermec. Its what I use on 6 greyhounds and we use in our adoption kennel. Less than a $ a dose. Happy to give specifics.

I hope you have a contact at the SPCA that will let you know if they end up with Chance. And do tell, what kind of dog is the little girl?

Ahem! Ridiculous! I feel really bad for chance cuz I think he would have loved being your dog.

Just wondering would it be so hard to do the Heart Worm thing? I'd be impressed with someone who was willing to take the extra step and a picture of your awesome fence would reassure them. Just send them to your blog. I could write you a letter of recommendation. (I like that dog). But then, I'm the type who isn't easily deterred if I think something is right. But then, I'm obviously a sucker for dogs. I have 6 dogs and 3 puppies (for now) on working cowboy wage. Kind of crazy I know.

I totally agree with you. I am a veterinary technician student (almost done!) and I see how certian shelters and veterinarians are rip offs. It is sad when there are millions of pets needing homes, and they pull stuff like that. It makes me mad that they have a nice home that an animal can go to, but is denied.It's all just a bunch of bologna. At least the little girl your waiting for will be taken care of, assuming that will runs test and spay her while she's at VT school. Good luck!

We had the same kind of problem with the local shelter on 3 different occasions. Other applications were selected over ours and when I called to ask why I was told that there was no real reason. The only thing I could think of was that we already had 1 dog. Who knows. I'm not a huge fan of this shelter or the manager. It's really a shame because I wanted to save a life. But we got Zoey who I love to pieces.

That's awful they denied you! Too bad you couldn't get one somewhere else and give it a great life and then pull off the Pretty Woman scene where she goes back to Rodeo drive with all the bags and goes Big Mistake Big Huge.... haha

West Side of Straight said...

Doesn't that just tick you off?!? If they'd do a better job of checking - they wouldn't have refused your app. Poor Chance.

Idiots. :/
Glad you have another dog in mind.

Hope you all have a good weekend!

Oh I know you are disappointed, but I wonder if it was because they think country people just let them run wild? I must say you should be on heart worm preventive, especially in the climate you live in. It is expensive but well worth the heartache of getting heartworms...that is a horrible death. I had one die like that years ago before we knew what heart worms were, here. Found out after the fact.

I added myself to follow your blog. You are more than welcome to visit mine and become a follower if you want to.

We went through the frustration a couple of years ago of adopting a dog. We too live in the country and for some reason, if you don't live in town and have a 6ft privacy fence around a large backyard, you aren't fit to have a dog I guess. We had another that didn't give us the time of day because we have younger children. If they would have checked, they would have learned that we have a lot of experience training dogs... having children was not a problem. I kept looking though and we found a breed rescue that used some common sense and we were finally able to adopt. It is sooo frustrating though!