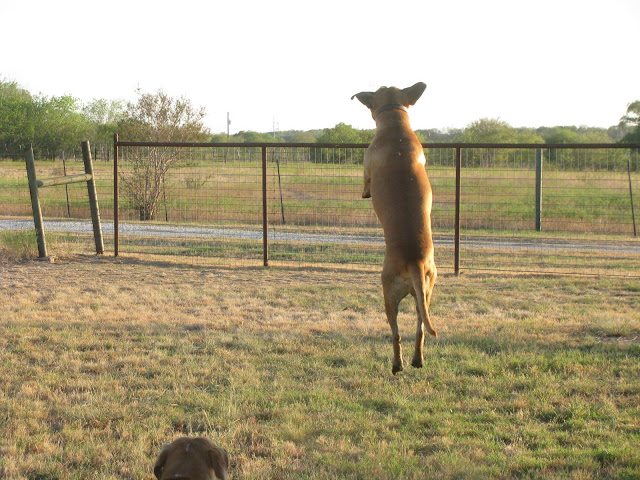 He is working on his levitation skills for Halloween.
Created by The Wife at 7:35 PM 8 comments 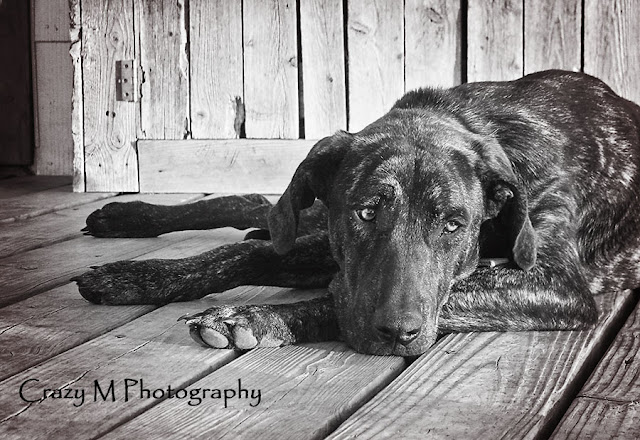 Yes, my lil girl has grown up.  Hard to imagine when I brought her home earlier this year at 5 weeks old, she would be such a beautiful big girl.  She is all legs, taller than Diesel and Lucky.  Don't know when she will stop growing.  The Husband says she's part Great Dane! ;)

We are having a girl's day on Friday.  She's gonna go to town with me to run some errands.  Probably head to Petsmart and pick her up a treat before headin' home.  We'll bring some home for the boys too.  Can't leave the them out!
Created by The Wife at 6:33 PM 14 comments

UGH, What a Monday!

Man, this was a Monday, if I've ever had one!  It started out with a raccoon extraction from my yard.  I had given it every opportunity over the past day and night to remove itself.  However, it had not.  So I notified work this morning that I would be late cause I had critter issues.

I put the kids in the stock trailer and left the yard gate open, hoping it would just saunter out of the yard.  Sure enough, after about 30 minutes, I saw it come down the tree.  But every time a noise was made, it would run right back up it.  It even made it out of the yard SEVERAL times, only to turn, run back in and up the tree!!  UGH!

I gave it several hours.  Continued to get ready for work in hopes it would leave. (Insert Harley throwing up on the carpet during this time.)  Got out of the shower and noticed it cruising around the yard.  Of course, it was not going in the right direction to LEAVE!  At one point I lost sight of it so I went out the front door.  As I came around the house, it spotted me and guess what, RAN UP THE TREE!

So back in the house I went.  Time was running out.  Now it was not coming back down.  I pulled the .22 rifle out and loaded the rat shot.  Gonna come down one way or another.  I went outside and scattered it's butt several times.  Then I was out of rat shot.  It hadn't budged.  Next step, actual .22 bullets.  I came in the house and got the clip of "real" bullets.  Headed back out.  As I walked up to the tree, the sucker was climbing down.  He stopped and looked at me.  I looked at him.  Then I said, "okay, if you're gonna leave, I will go back in the house.  But this is your last chance."  I could see the comprehension in his eyes.  I turned and went in the house.  As soon as I shut the door, he scurried down the tree and headed for an exit. 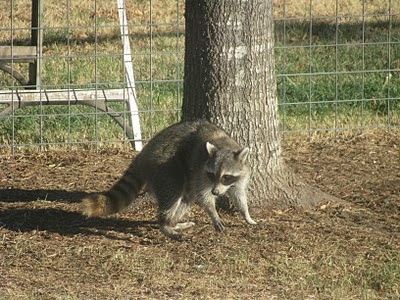 I was finally able to put my dress and heels on to head to work.  Got there just by the time like I said I would.  Work was pretty uneventful.  Walked out to go home and guess what....flat tire!  Seriously!  I was not dressed appropriately to change a flat.  I finally figured out that I had OnStar's roadside assistance!  Duh!  So they sent someone to change the tire for me.  It was very nice.

Then I got to go see the Husband, which I hadn't seen in over a week!  He flew in from Washington this afternoon.  He was at work so I took him supper.  He brought me saltwater taffy.  My favorite.  That made up for the otherwise crappie day!

Okay, my whine-fest is over!  I just hope your Monday was better than mine!

We have some cooler temps.  Well, cooler as in less than 100.  Now we just need rain.  But one wish at a time right?!

So what have we been up to around here.  Not a whole lot.  More of the same.  Workin' our jobs and workin' our place. 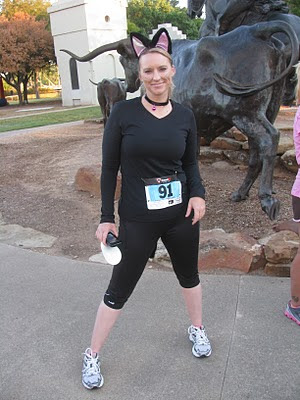 The bell on my collar was quite annoying.  Jingle, jingle, jingle for 3 miles.  I got plenty of stares as I ran up on people.  I would just look at them and say "yes, I know it's annoying!"  But my team's theme was "walk on the wild side" and they wanted everyone to dress up as an animal.  Of course, I'm the only one that ran the race so I had to choose my outfit accordingly.  We did win craziest team!

The kids are all good.  The Husband was giving them treats here. 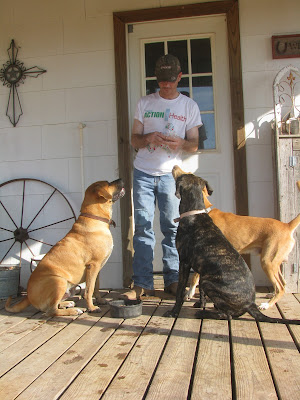 They have another raccoon treed in the yard.  Noticed it yesterday.  This morning Diesel and Penelope were on guard duty.  However, I don't think they were doing a very good job. 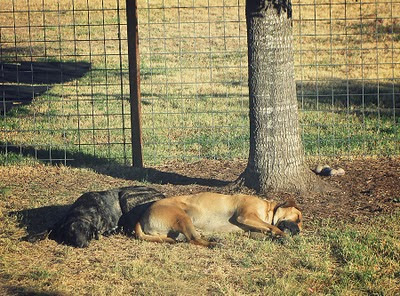 We have several things coming up this month.  I have a big photo shoot next Saturday.  13 mini sessions to benefit the local nonprofit spay/neuter clinic.  Then at the end of the month, Stubby is entered in a bull competition .  Fingers crossed they all go well!
Created by The Wife at 11:30 AM 8 comments