We bucked our calves this weekend. It started out with us driving 4 hours round trip to pick up panels on Friday. We needed them to set up an alley and loading area for the lil stinkers. They are pretty wild when you get them contained and bounce off everything. 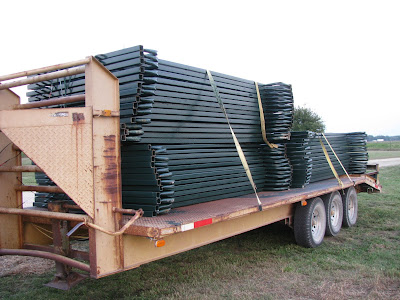 Here's the load we came home with...40 heavy duty bull panels. And believe me, they are heavy. The husband and I unloaded all of them. He did most of the work, I helped all I could.

Saturday morning we got the alley and holding pen set up. We managed to get all the calves in the pen with a little feed. Feed is always the magical component when wrangling our cattle. After they settled, we loaded them up and headed for our favorite town to buck em.

This a.m. was the big moment. It was their time to shine. We bucked the little heifers first, than the bulls. Here are a few them in action.......

This is a little heifer out of one of our longhorns. She really tried. We didn't get it on film but when the husband was trying to get her out of the arena, she went after him. I didn't know he had those moves in him.

This little girl is out of our broke leg cow. Well, her leg isn't broke anymore, she is doing awesome. Her baby tried real hard.

I saved the best for last. I want to introduce you to Tadpole. He's out of another one of my longhorns. We didn't have any intentions on weaning Tadpole this go around cause he is so small. But he just wouldn't cooperate and leave the pen. We were worried the bigger calves would bully him off feed but Tadpole holds his own. He gets right in there and makes em move over. Tadpole seems to cause problems. He never wants to go the way you need him to, kinda runs blindly in a scared state! The husband has cussed him on numerous occasions and was hoping to take him to the sale barn. But after the try he showed today, I think he's staying with us. Sorry husband!

Not sure what kind of content you had up for this post, but they only thing that is showing is the title. At least its that way for me.

I was having technical difficulties last night. Sorry!

Looks like you have a couple good ones! Can hardly wait to see what they look like when they get a bit bigger!

See ya this weekend! I'm so excited I finally get to meet a fellow blogger! Woo Hoo!!!!

I have a soft spot for the underdogs, so I like Tadpole, what a cute name too!

The first buckings are so fun, you never know what to expect out of the little ones, do you? They will surprise you every time!