Well the husband has completed a full week of radiation. He's experiencing some stiffness in his hip and achiness.  And I think he may have over did it this weekend so he hasn't felt real well the past two days but for the most part, he's doing alright.  He has been following the "rules" about lifting too.
Other news this week, Stubby is back home. After spending time with the neighbor's cattle, not by the neighbor's choice, they brought him home a few days ago. We had tried getting him several times but Stubby just loved those F1 girls. :) Now that his jail was complete, we just needed to get him back.
Well, we got home late one evening and I went out to feed the young bulls. I walked into their pen and noticed the walk thru gate to Stubby's jail bent in half. I  went back out and asked the husband if he saw where the young bulls were. Yea, they were where they're suppose to be.  I told the husband to come with me. I showed him the gate and he immediately said Stubby! The neighbor had brought him home without us knowing earlier that afternoon.  Of course, he escaped out of the only small gap there was in the 7' tall pen. We had planned on fixing that before he was put in it. So I went around the barn and looked, there he was.  I got him to follow me back into his pen. We moved some panels to cover his escape route. 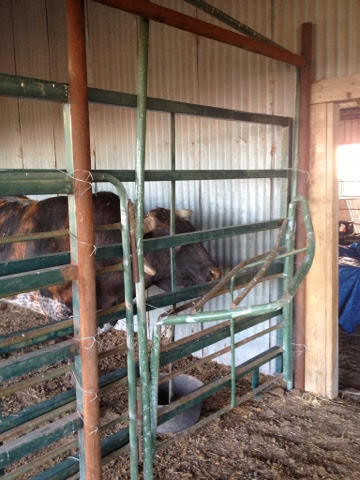 The husband was not happy with "MY" bull. He said he was going to give me a bill for everything he's torn up. Whatever!  He's been contained for several days now. We'll see if it lasts or if he decides to try his hoof at climbing.
The husband took some young bulls to Stephenville on Saturday evening. They bucked them for us early Sunday. I had to stay home for a photoshoot. I think it may have been a little too much for the husband though. He felt puny after getting really cold that morning. So he'll have to learn to pace himself during his treatment.
So besides Stubby's eventful homecoming, the past week has been pretty quiet.  We shall see what this week holds for us!
Created by The Wife at 9:03 PM

Quiet can be good! lol. We had a bull that just LOVED visiting the neighbors gals. Good thing the neighbor liked it too. It saved him money in having to rent a bull. Oh, by the way, that bull was sold. LOL

I'm just checking in on my blogs and read your past posts. Sorry to hear of your husbands diagnosis and I hope/pray and will all to go well. Been there in those Cancer shoes myself..and you can't explain how much there is to think about. You've got it handled. You're a strong couple and everything works out! Thinking of you from Central SD

Well if the husband is half as persistent as Stubby that cancer doesn't stand a chance.