After months of going round and round with the company, I finally received the results yesterday.  It was only suppose to take 4-6 weeks to get them back.  It's been 3 months!  So if you remember, the husband and I have had some questions on what exactly Diesel's breed may be.  He's always been labeled a mastiff from the beginning.  That's what the shelter/rescue told the original adopter.  Once I got him, I began to suspect that mastiff may not be quite right.

I had done research on mastiffs.  I've always wanted one because they are just huge gentle giants that lay around.  There is no laying around with Diesel.  But don't get me wrong, I LOVE Diesel just the way he is.  I just want to know what his breed is so I know more about him.

According to the DNA testing company, their results are extremely accurate.  Of course, the company is going to say that.  But after reading the results, it seems to fit based on the behavior Diesel exhibits.  Any guesses on what the results showed?  Let me tell ya, Mastiff was not listed as part of his DNA!


Yep, that's what it said.  The husband and I always thought he had Lab in him.  He loves to swim and fetch.  He would do that ALL DAY LONG if you let him.

But I never thought about a Boxer!  I know from my experiences with dogs that they are very energetic.  Here is short description I found on the web:

"The boxer is playful, exuberant, inquisitive, attentive, demonstrative, devoted and outgoing; he is a perfect companion for an active family. He can be stubborn, but he is sensitive and responsive to commands. He is generally good with other household dogs and pets."


That pretty much pegs Diesel.  And further research shows that boxers come from mastiff lines.  So in truth, I do have a mastiff.  I also found out that early in their breed, they were used at cattle dogs.  Maybe that's why he liked chasing the cattle?  But we had to stop that behavior!  It was out of control!


So can you see the boxer in him? 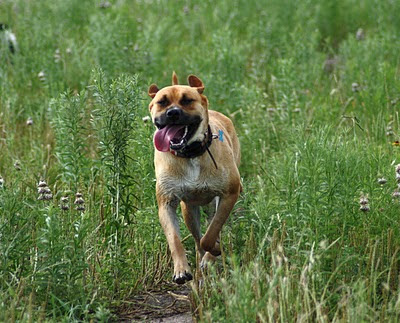 Well that does explain him very well! When I had the Mastiff puppy Maia here I thought she looked different from Diesel, and she was slower and more clumsy, but I thought that was because I was comparing her to my border collies.
Diesel is perfect , no matter what!

I can see it in his face and the blockiness of his head. Also the urge to destry is for sure Boxer! We've always had a boxer around, ever since we got married. Ginger is a pretty atypical boxer, except for every Christmas she eats my dad's gift. She got it last year and she got it this year. So now our tree has no presents under it!

He's a handsome boy for sure!

That describes him well, I guess the lab tones down the Boxer look some, but straight on he does have a wide jaw... made me laugh when you said LAb though ,both because I heard a nickname for labs "LAbradork" and did I ever send you the "meth lab" picture?

I have always loved the labs (being that I have one!) I also love the boxers but I will stick with my Healers. Diesel doesn't care, he hid it just so you would adopt him. Sneaky dog ;-)

That's what I was going to say. You can see it in his muzzle, and his color, too, I think.

Maybe you can find some way to train him to help you with the cattle instead of chase them.

Wow! That's great that you had DNA testing done. Now you know and it's great to look up his breed's traits! Amazing!

Ahaa! Boy that DNA testing is cool eh? I wouldn't have guessed a boxer but then I've never been around them either. Around labs though and I can see that in him. Glad you found out, finally.

I'm always a little surprised by what these tests show. Very interesting.. I don't see the boxer, but I could see Lab/Shepherd?
He's cute and loved, that's the best part :)

Labs and boxers both love to tear things up... Labs when they are younger, before they learn their manners and boxers because they are so active and curious about everything...or at least that is the reason I was told. But Diesel was meant to be your boy, Mastiff or not, and he'll know the ropes so if you find a Mastiff baby he will be able to teach them everything.

It's downright amazing the things they are able to do with DNA nowadays.

Well now that explains a lot! He really is not built like a mastiff.

that makes way more sense to me too,

Well that does explain a lot! The love of water, the high activity level, the shredding of every dog bed ever made, LOL! He's a great dog.

I did the test on my Gabby, as she has been called a German Shepherd mix ever since she found me 14 years ago! & I never quite believed it. Once, I wasn't able to get renter's insurance because she was on the "bad dog" list. But, the results proved everyone wrong - Border Collie, Akita, Chow, and...Beagle. Not a German Shepherd gene in her body. Ha. So there.

I can definitely see the boxer in your boy. What a happy guy he is.

yes I see it, I kinda thought he didn't look like what I thought one was suppose to look like when you got him but he is cute and he is probably better suited to your life than a mastiff would have been. I wish they would have had dog DNA reasonably priced before we lost our good girl Kelsey. We were always so courious about what she really was. WHATEVER SHE WAS, WAS PERFECT!!!!!!!! just like Diesel

He's a handsome boy no matter what his lineage is. :)

Yep, you got yourself a dog that is part BOB! I've seen it in him all along.

Oddly enough I see more boxer in him (the color is what does it for me) than lab.