I've just felt boring lately.  That's why I haven't blogged much.  In my eyes, there's nothing worth talking about.  How exciting does that sound? Pitiful, huh!  I helped the husband put out hay this weekend.  Actually took my camera out while we were doing it.  This is pretty boring too but at least there are pictures.

I'm the keeper of the gate while the husband brings the hay in.  It's never good to see this coming at you!  Especially with the husband driving! 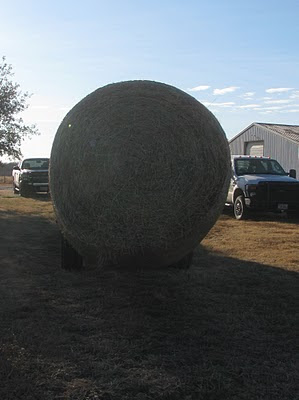 The bull pen was first.  Stubby was very interested to what was going on.  He's still so pretty. 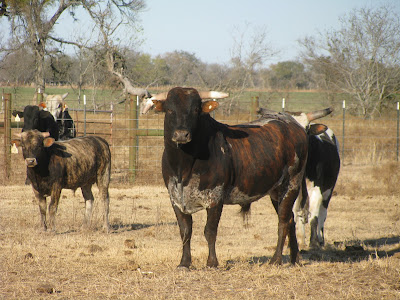 The weanlings were watchin' closely.  They wanted their hay too. 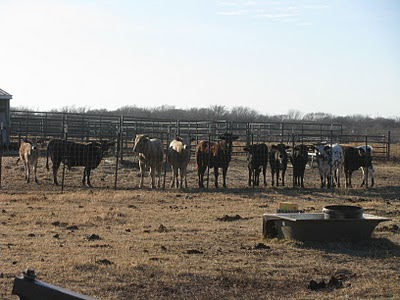 Eyebrows was giving me the evil eye.  I don't trust him.  I stayed in the pen taking pictures while the husband went for another bale of hay.  The husband said he thought Eyebrows was gonna come after me.  He said he was trying to figure out how he was going to jump off the tractor and run through the pen to save me from him.  I was taking pictures of Stubby and Gus.  Wasn't even paying much attention to Eyebrows.  I didn't feel threatened though. 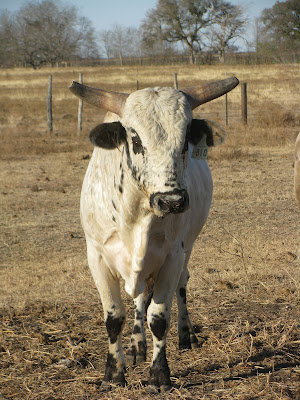 The heifer pasture was next.  We have the young heifers at the house.  Want to keep them close for when they start calving after the first of the year.  The one on the right is Bucky.  She's very ornery.  She'll chase ya.  I don't go out there much.  While I was out there then, she kept coming towards me.  I finally got on the tractor with the husband.  Her horns are way to pointy for me to be messing with her.  She needs tipped! 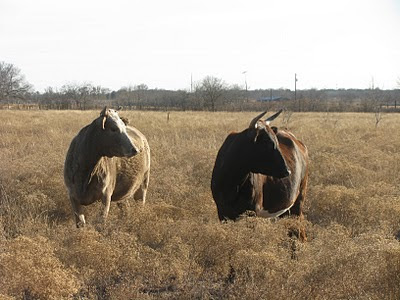 Next was the baby pen.  They waited patiently while the husband took the netting off the bale.  Do you see who's in front?  Know who that is? 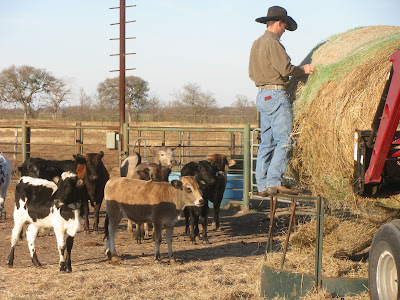 Roscoe couldn't wait any longer.  He dove right in! 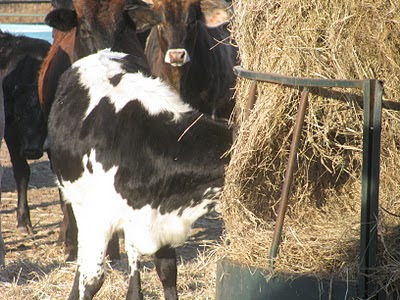 Maybe I'll find more inspiration in my mundane days to blog about.  I'll keep looking.
Created by The Wife at 6:57 PM

Girl your life is never boring to me! I love your pictures, whatever you want to shoot and I love hearing about the every day.

Have a Merry Christmas girl, and much love from the Goodwife!!

Kit, boring is good sometimes ,we have had frozen watering bowls again and while it isn't boring fixing them in sub zero temps I would be happy to give it a miss.The stock looks great! Nice to know the Husband has his eye on you in case there is trouble and is ready to come rescue you !

I have had the same problem lately--either too boring to post, or too worn out from being busy to post.

But I am very jealous of your hay bales--so pretty! and BIG!

With the cattle you folks have life could get too exciting mighty quick. Good thing you have someone watching your back.

We all think our lives are boring and yet folks out there find it all so interesting. I can't imagine why anyone would want to read my blog.

We all enjoy every little thing you tell or show us.

With all those animals, how could life be boring?

And being totally ignorant, I have to ask, how does weather affect hay bales?

I see some people who leave them out from the time they are rolled.
And of course they sit out while the animals eat them.

But I've read that leaving them out destroys all nutritional value. Seems confusing.

And Roscoe obviously thinks your hay bales are fine! :)

I imagine the netting is used just to hold the bale together for transport?

Weather looks great there. Have a good day!

yeah, once winter comes it is a little more difficult. Wow you guys look so dry, but I guess it is winter and we're just as brown looking. I'm ready for summer already ;) Merry Christmas to you, the hubs and the "kids" :)

Those are great pix. And what you find boring.... I see as a fond memory of my past life.

What happened with Mad Dog? I must have missed the end of the story, does the bad rancher still have him?

Also wondering what the latest is on Mad Dog? I have had the unpleasant experience of dealing with neighbors like the one you mentioned...still don't understand them. I just figure they must have a miserable life. Merry Christmas!!

To my fellow Texas Blogging Gal, I hope your Christmas is filled with joy, peace, and love.