There's an Elk in my Bed!

The husband went on a Colorado hunting trip the Thanksgiving before last. He shot a huge elk and had it mounted. Well, he just got it back and let me tell ya, our house was not built for an elk mount (fyi, our house is only about 1000 sq ft.). He had wanted to put it in the living room. We tried several different spots but our ceiling is too low or the elk's antlers are too wide, or the possibility that I will poke my eye out is too great!
The husband finally decided to put it in the spare bedroom. So he and the father-in-law attempted to take it down our small hallway. Well, the husband tried on his own at first as me and the FIL watched. After giggling at him, the FIL decided he should step in and help. I on the otherhand thought getting the camera would be more appropriate. It took the both of 'em and several minutes to get the thing manuevered thru the hallway door and down the 3 ft. hall. 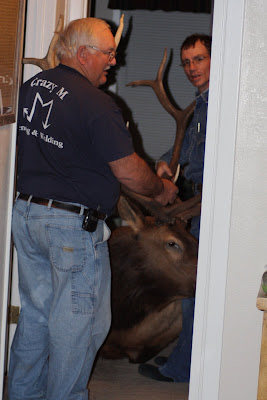 They saw me taking pictures, so they thought they would add a festive touch to the poor thing. 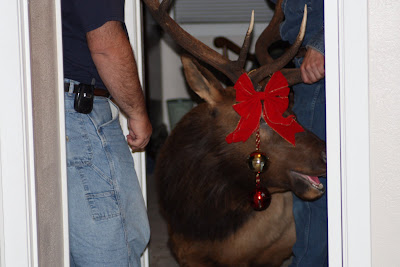 They finally got it in the room and the husband decided it would work on the wall. But, as you can see, it is only a few feet off the floor cause the antlers hit the ceiling. Not the best placement. 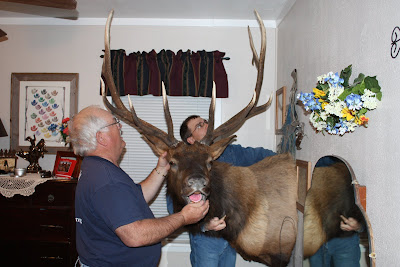 So he was placed on the bed for further consideration. 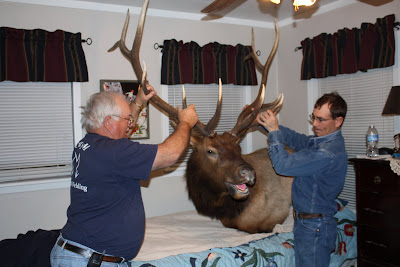 I think the elk's expression says it all during this quandry..... 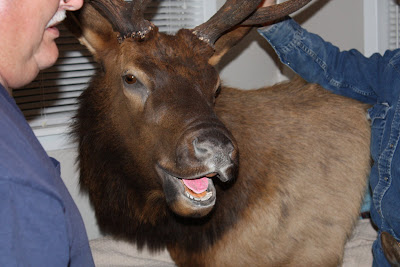 Do ya think he's laughin' his butt off about the situation? Well, figurative butt that is!

Oh, my husband would be so jealous. Of the hunting. I, on the other hand, am not jealous of you having to fit that big thing somewhere! We wouldn't have room for it either. But, he's a great looking elk!

That's a nice looking elk! Wow! Looks like you may have to add on a trophy room to your house!

I'm so glad TNT isn't a hunter. However, he has many racing trophies that are just as big of a pain. There's a reason they only get dusted a few times a year.

Hope George does better planning than that when he's building a fence!!

Wow, that is awesome. My husband would be so jealous.

Oh - I feel sorry for the elk! But he looks cute in that red bow!

That's a really nice elk...but he sure can fill up a room in a hurry!! I love his laughing expression...totally fits the situation at the moment!

Someone was telling me a similar story just a week or so ago. It was his life's dream to get something with huge antlers on display in his home. It ended up in his shop!

Ahh- Life in the country. Nice elk my hubby would be jealous and determined to find someplace to hang him up.

Ut-oh looks like a lovely trophy room addition is coming to a blog near us soon.

Hey, can I borrow that? It looks like a ssolution to not having guests of the two-legged version! I could tell my 'hunter' bunch' the quota is filled.
Can;t wait to see WHAT you end up doing...my suggestion if it were my cowboy, would be..."Hey, that'd look mighty fine in the barn".

hahaha wow that is HUGE

Umm you could always hang it low and place boards across the horns for a bookshelf. In this outfit it would HAVE to be hung in the living room no matter how low;)

Holy Cow! I mean... ELK! That's one gorgeous beast, but there is no way it would ever fit in my house.
ROFLMAO!

That is one beautiful mount! You need a huge room for him to be in! I have the perfect room and I promise to dust him off once in awhile!
Someday you will have the perfect spot to show him off! :)

Hey- Far Side of Fifty stole my line! I really do have the perfect room...
Lil Mama's Mighty Hunter is going to be jealous too!
Keep the red bows~ they are very festive!

In the third picture, it sort of looked like your your husband was flipping you off in the mirror, but I think it was the wrong finger.

We're 'lucky' enough to have a deer mounted onto our spare bedroom wall. In fact, if I'm laying in bed, I can see the deer head reflection from the bathroom mirror. It's great. hee hee.

Ok.. now that I have stopped laughing. We have egg-zactly the same problem in our little 900sq foot house. I have to tell you decorating with dead animals is an art. I may have to blog about that soon.
Yeah for the husband. It even pulled The Hunter away from UFC fight night to have a peek.

very nice rack!! i am just glad to see that someone else is having to decorate around antlers too! i feel like i am in deep south texas and it must be rutting season, there are so many deer looking at me!!!

You might want to stop by my blog today!!! Guess who Trixie Sue picked?

I couldn't have that thing looking at me in my living room - creepy, but he (she?) looks like the reindeer in the movie elf!

Soooo does he have the giant sunglasses and necktie yet... :-)
p.s. I LOVE the dog at sunset with the hat pic!!!