The day of our wedding arrived. I was calm as a cucumber. The husband, not so much! I remember sitting in my robe in the living room drinking a coke and watching music videos when my dad showed up to drive me to the park. "Don't you think you should get dressed?" he asked. I put on my dress and headed to the gazebo.

The husband, on the other hand, was freakin' out. He says he was thinkin' how he could run but was too worried that my brothers and dad would catch him. He also recently divulged that his friends and family were telling him he didn't have to go thru with it while he was gettin' dressed at the hotel. Thanks a lot guys! He looks a little nervous, doesn't he!

I gracefully walked down the isle and tripped going up the steps into the gazebo. Wouldn't expect anything less from me. The husband was crying. Don't know if it was from joy or sadness! So then I started crying. Then the maid of honor was crying and even I think the bestman. What a sobfest. But the husband's facial expression doesn't quite express feelings of happiness....... 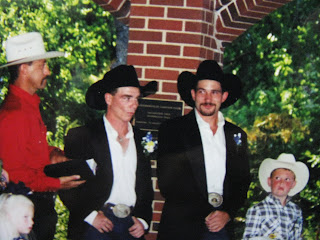 Okay, are the thoughts of running still going thru his head. Look at the bestman and ring bearer, they are just waiting for him to bolt!
We managed to say our "I dos" between the sniffle and snorts. And the ceremony was done. Thank goodness. Then it was off to our reception, the bullriding! 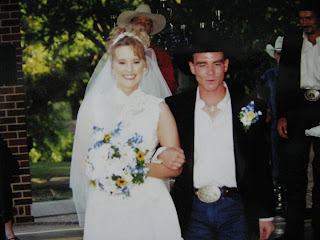 Finally, an expression other than terror on the husband's face!