We have pens behind our barn.  They are made out of heavy duty (6 ft high, 10 ft long) bull panels.  We use them for all kinds of things like sorting, keeping bulls, etc.  Recently we were housing Stubby in them.  We plan to buck him in September so we penned him up to feed 'em and get him ready.  The Husband bought new feed (some our stock contractor friends use) and was trying it out.  I think it has given Stubby super powers!

Not one week after penning him, the Husband found him in Mojo's pasture!  He jumped a smaller gate and went thru the fence to get in with Mojo.  That got Husband to thinking and we all know that leads to work.  He decided to switch the pens around.

First he took out the shorter gate and closed it off with the high panels.  Stubby contemplated that situation for about 3 days then did this... 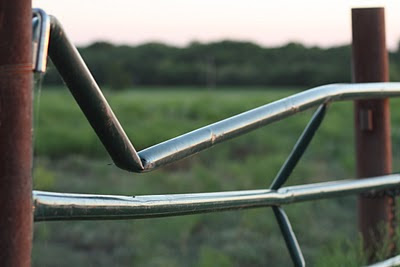 He found another escape route!  And left his belly print on the gate.  The Husband again closed off everything we thought would be tempting for him to jump.  Then a few nights later, the dogs barked ALL night.  Husband went outside but couldn't see anything.  We don't have a security light so it was pitch black.

Next morning, Husband went out to feed and saw Stubby was gone from the pen again and the barn was ransacked!  This time he used Gus' pen to escape.  I had moved Gus to the other side of the barn so I guess he saw an open opportunity!

You see his belly print here on the right.  He basically went thru another gate at the back of the barn to get to this one. 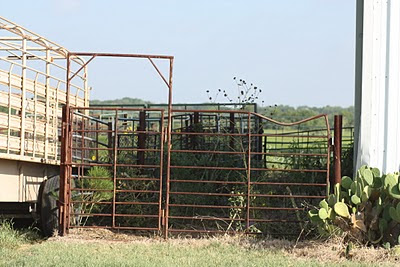 After he made it out, he went in the barn, got a midnight snack and hooked everything.  He also made is way down the drive.  Luckily, I had asked the Husband to close the front gate that evening.  We NEVER close the gate but we replaced it that afternoon.

So after his little stroll, he decided to go thru the fence into the pasture. 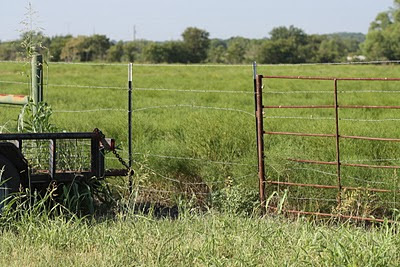 After that, the Husband said he was doing a complete overhaul of the pens.  So Saturday and Sunday we moved panels, pounded t-posts, tied wire and SWEATED!  Now we have three holding pens and a load pen.  All the outer border is tall panels.  We just knew this was going to do it. 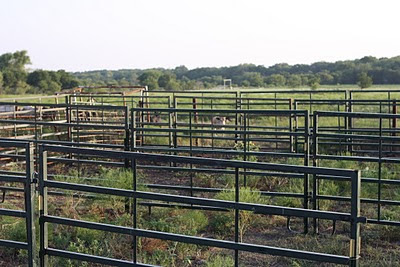 So we get Stubby into the pen late Sunday evening.  Husband heads out of town on Monday.  Tuesday I go out to feed before I leave for work and guess what.....NO STUBBY! 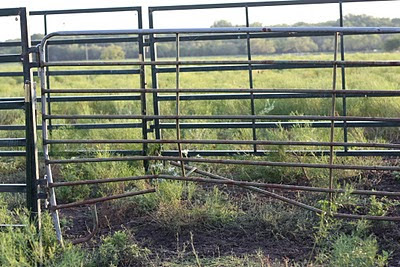 And this one in the alley... 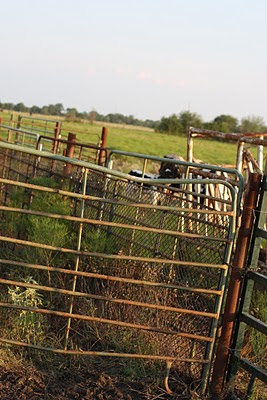 And then this one in the load alley next to the trailer! 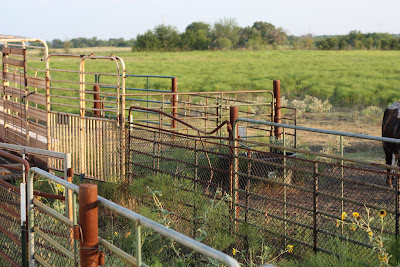 I swear every panel on our place is gonna have the Stubby imprint before all is said and done.  I found him in the trap next to the barn with the calves and Itty Bitty.  He came up to the gate wanting his feed.  I told him he was bad and I was punishing him with no breakfast.

When I got home yesterday afternoon, he was in the pasture with the other cattle happy as a clam. 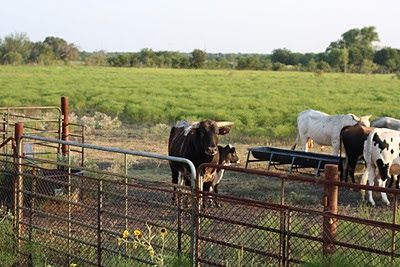 We have NEVER had an issue with him jumping out of the pen.  I swear it's the feed.  Their slogan should be "Red Chain Feed gives you wings!" 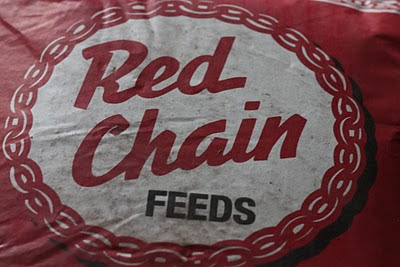 LOL We had an Angus calf one year that would go through any fence in her way!

I would be shocking his big butt LOL LOL Or would that just piss him off? LOL

lol...oh that stinks!! the onery little stinker. He's just wants to keep ya'll on your toes. I think he has seperation anxiety and just needs a friend.

Boy, one bull can do a lot of damage! Was he lookin' for a girlie friend?

I love the slogan!!! Sucks when bulls/cows do that!

Huh - you almost can't get mad at him cuz he is doing just what you want him to do! But frustrating keeping an animal in - different feed after bucking?

Don't know if he bucks well, but he can jump! I would be tryign a hot fencer too se if that slows the silly booger down

He's playing the guessing game, where will you find me today! I agree with the hot fence, but the thing is even a hot fence won't keep him in if he wants out bad enough! I had a momma go right through one when her baby got underneath and onto the horse side of the fence, momma stopped for a while but it wasn't long and she barreled right through that fence to get to her baby! Better be thinking of Task 111!

Crap on a Cracker!!! That is one heck of a flying bull ya got there!
Have you considered using him in the Macy's Day Parade as a float ?:-)

Maybe you should recruit him as a showjumper. We have a lot of bent panels like that but it was from out gelding chasing the heifers around and the heifers deciding it was safer on the other side of the gate.

Holy Crap! Those are high! What's he doing? CLIMBING those gates??? Jiminey.

I love how you can see his path of destruction. I hope his escapes are an indication of how well that boy can buck!

I read this with a big smile and my eyebrows going higher and higher. He sure is a jumper!! Total path of destruction, lol. What are you gonna do now? lol
He's determined, gotta give him that.

Now that he KNOWS he can get out, it's just gonna make it worse.

I had a big show bull that would walk through electric fence and use his stubby horns to rip the planks off the fence. He never went any where, just across the ranch road to my house. Since he was a show bull, all I had to do was clip a lead rope to his nose ring and he was very polite.

A powerful electric fence may help, but run at least 3 strands. Or just keep him where he's happy!

LOL, I love your sense of humour. Seriously, at the ranch where we used to work they used railroad steal rails for fence post and like 1 inch cable running through holes drilled in the steel and the bulls there even managed to take that fence out, bent the steel rails and all. Fences are pretty much just a bluff for a bull. It's like anything else, if it's what they want it's all good. Remember that next time your kissing one from the other side of a panel, eh?