We headed out to the lease yesterday.  Wanted to see if we had anymore babies and put up a fly rub.  This was the first time we used a rub.  Most years, we use protein tubs that have stuff in them to kill the flies.  And we spray the cattle.  But we waited too late for the tubs and it's not convenient to spray cattle that are out to pasture.  So we got the rub put up.  Mixed the solution and poured it on.  Now, wonder if the cattle will use it? 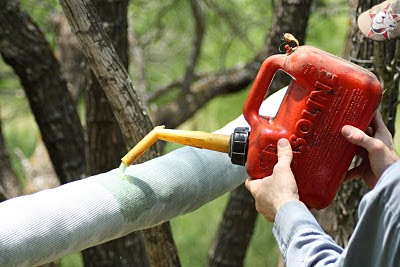 We had a good crowd watching us put the rub up.  The kids didn't know what we were up to. 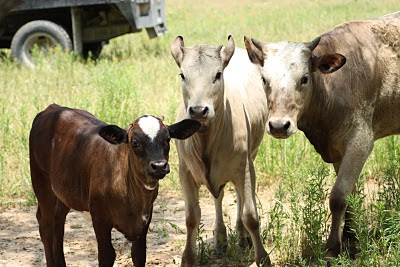 And Bully was just wishing I had treats in my pocket.  Sorry, I didn't. 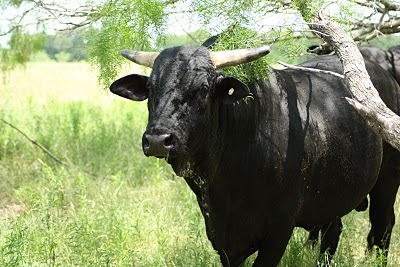 And the girls wanted their pictures taken.  They haven't been on the blog in awhile.  My black ops commando donkeys....Pearl 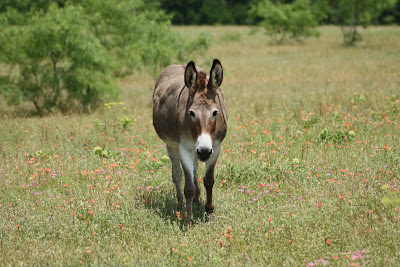 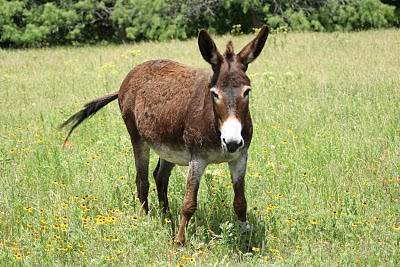 Aren't they the cutest killer donkeys you've ever seen? I think so.  Then we followed Ruby off into the brush.  We know she had a calf.  But she had it hid. 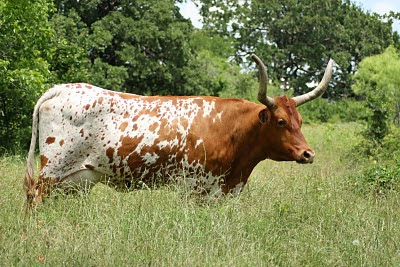 The husband and her at a standoff. 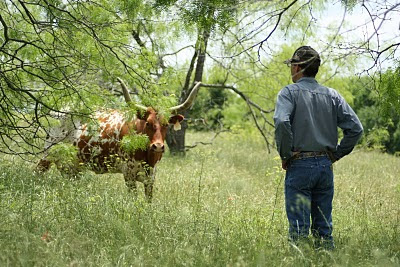 We just knew the calf was in the brush right beside her.  I stayed back.  What does Ruby do?  She walks around husband and towards me!  Lil ol me!  I wasn't doin' nothing but respecting her space.  But nooooo, let's pick on the wife!  I'm good at circling trees though.

We never did find the baby.  I think it moved on her.  She acted like is was suppose to be there.  We looked but it wasn't.  I'm sure she found it after we left.

**Ask the Husband has been awesome!  I gave him a list of all the questions and told him to get with it!  He was really surprised by all the response.  I will have several posts with his answers ASAP.  And since y'all were so great, I will have a random drawing for everyone that participated.  I'll let the husband draw a name and I'll send ya something.  Yeah y'all!**
Created by The Wife at 7:48 PM

Y'all are nuts to be even thinking of being around those horns! I like cattle, sure... but with horns like those? I would be circling trees too! All I could think of when looking at Ruby is that it's a good thing that the babies aren't born with those things already on their heads! lol!

They are looking great , a little calf hunkered down in that tall grass would be hard to spot . We use an oiler?scratcher , they seem to love it , to star them out we put the salt in a tub rightwhere thet have to go under to get at it.They actually make some with a salt tub built right in . (But you probably know that)

Love the pics. I need a donkey. Not sure where I would put it....

The calves are soo cute! -- Ruby is very beautiful but wheww... those horns are something! Anxious to read hubby's answers!

Great pics. Those are some killer horns. Not sure if I'd be getting that close to them!

Gotta love them donkey's!! Great safety feature huh?! WHOA those horns are something else!! I wanna see her baby!! Was up with her circling to you?! Maybe she's jealous ;)

I'm so glad the Hubby is putting up with all us crazy gals LOL!!! You guys are so much fun!!!

No self respecting cow can actually admit she misplaced her child. I can just hear the lecture now........Junior! You made me look like an idiot! LOL And yes, Pearl and Minnie are the cutest black ops donkeys I've ever seen!

We can't have farm animals where we live but my Sis can and she has two mini donkeys and they are just a hoot and a half.

So, did they use the rub like good obedient children??

Awe I love Long Horns! We have a steer but he's getting up there in age unfortunately :(. This winter was hard on him and I'm afraid eventually we'll have to replace him but he looks so cool walking through a pasture of Santa Gertrudis cattle!

And you use donkeys. They are cool looking!

That is what all the cows do to me!! They walk right past my husband and come sniff me out!! it's like they know we are another "girl" and want to steal their cute baby!! LOL!!

Love the pictures!! Your donkeys are super cute. Ours are little and funky, but yours are stout little buggers!

I know my husband probably has LOADS of questions for your husband...like how he got started in bulls, and what kind of blood lines does he have....and who he rode with while in HS and College...and who they both know....and so on and so on!! One of these days we'll have to drive up there!!

Oh, ask him when is he going to buy you one of those super cute mini bulls?

Man, that's some set of horns she's got! Love the donkeys.

I wanna know who won the stand off;) I think they just knew that they shouldn't mess with the boss!