The husband has been asked to help a young bullrider. His parents said if he was going to ride bulls, then he needs to know what he is doing. What smart parents! So the husband was called. I have said in the past that I think he does a great job teaching plus he really enjoys it. The husband went over to their house last week to meet the parents and the lil bullrider. Turns out he is only 10 years old! The husband wasn't expecting that. He's never worked with someone that young.
The husband called around to some local contractors to see if anyone had any steers or small bulls. One guy said he had a few small bulls he thought would be okay for the lil bullrider. So Sunday afternoon, the husband got to see the lil bullrider dude in action. 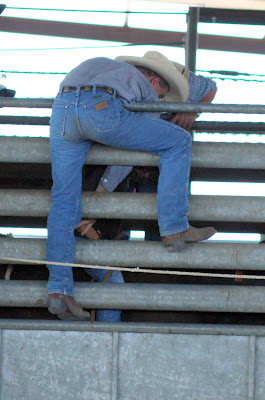 The husband pullin' lil bullrider dude's rope. Tellin' him the ins and outs of being in the chute. Then he knodded his head, out he came! 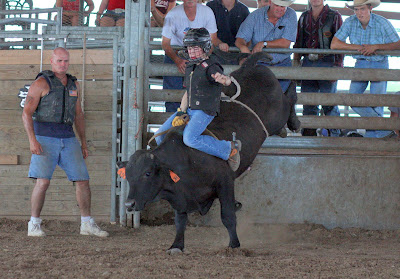 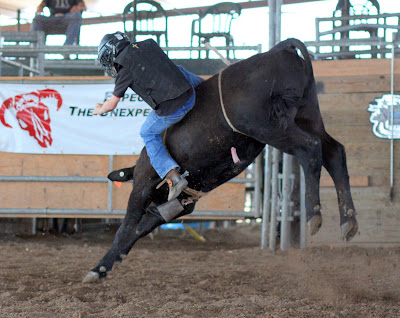 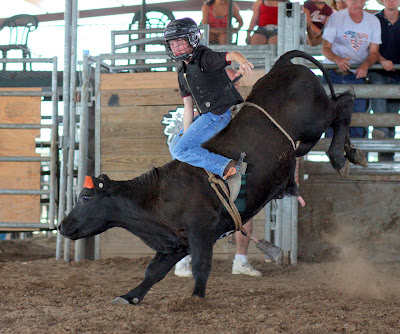 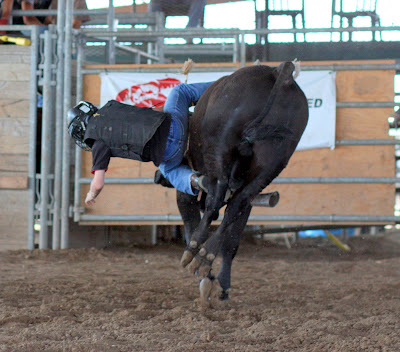 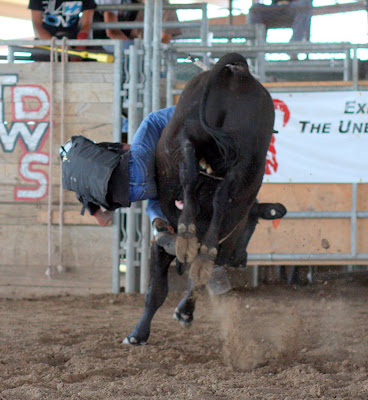 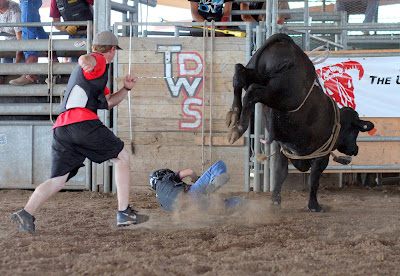 He actually rode and tried much harder than the older guys that had gotten on that day. He sure doesn't give up. The husband would yell at him to LET GO both times he rode! I'll keep ya updated on his progress.
Created by The Wife at 7:05 PM

Aww cute, he looks like he did a good job.

I think I will keep my son playing baseball! Geesh, that looks scary!

Wonderful, your hubby is an all star! mentoring the little guy! Looks like he is an up and commer too ! lots of try!

Looks so exciting!
A future bull-rider!

Bravo for the 10-year-old! When he learns the ropes, he'll be a winner for sure!

Awesome!!! Your Hubby is just a great guy!! Keep us updated on the young man's progress!!! My J tried his hand at bull riding this summer, but I haven't gotten completely comfortable with it yet so he hasn't gotten to do it again..


Hey my Verification word is: OVENS....Does this mean your cooking me something LOL!!

Looks like he did good. Your husband sounds like one of those really great guys!! I'll bet the kid thought the pictures were pretty awesome too.

That was really awesome!!..he looked like he has the will so maybe with the husband's help he'll gain the skill. Reminds me of when my boys ..(we had the buckin' barrel hooked up out back) tried their hand at being "Lil bullriding Dudes!" They told us later how they'd sneak and try to ride a friend's bull when he had him penned...with my boys ...I got used to being nervous. I'll be rooting for ya...."Lil Buckriding Dude"!

Well . . . the 'Lil Dude can sit a bull pretty good! Good teaching on the Husband's part!

Awesome! Sounds like he has a lot of try...

Can I go next?

Great photos!! How awesome is that he 10 years old..I noticed the helmet..!!
So good of your hubby to see this youngsters wish become a reality, he has lots of experience to share..My hat is off to him! :)

10 years old...that little guy really has a dream. How exciting for your husband to teach someone with so much spunk. Keep us updated on him.

My husband would be so excited to have have a little bullrider to train. That little boy sure looks like he is giving it all he's got!! Great pictures!!!