Yes, We Have a Cat

Have you met Miss Kitty? She doesn't make an appearance on the blog much. She came with the place. When we pulled in with our trailer of stuff, she appeared and has owned the barn ever since. 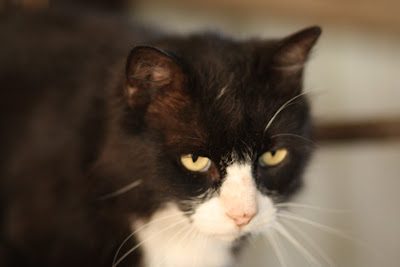 This is her typical look...kinda perturbed. 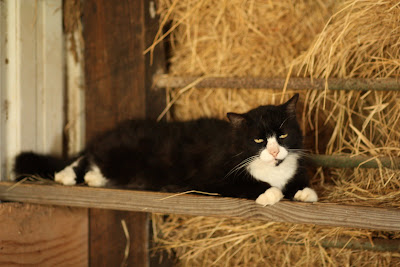 She stays in the barn, laying in the hay, minding her own business. She tries to relax but the dogs won't allow it. 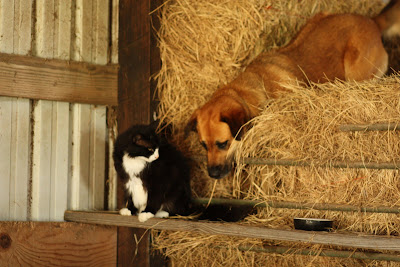 They gang up on her. Chase her every chance they get. 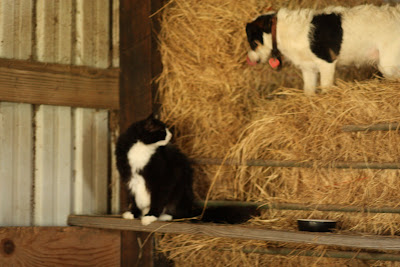 But she's pretty clever. She runs up the ladder to get away. 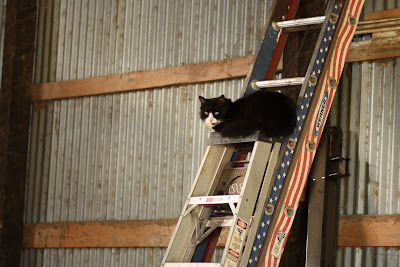 I found her sleepin' in the wheel barrel the other day. I guess the dogs aren't smart enough to find her there.

I bet she thinks she got the short end of the stick when we moved in. Nothing like bratty dogs to deal with on a daily basis. Poor Miss Kitty.
Created by The Wife at 8:23 PM

NO WAY!! I am posting about my KITTY! FREAKY.... lol I missed you. Can I come for a visit to catch up?

hey! want another one or six??? hey, did you get your stuff?

I love her expression. Looks kinda like a 'kiss my kitty butt' attitude.

Thanks for the laugh.

Sounds like my barn cat , only runs away when it suits him , the rest of the time he just ignores the dogs

She is a cutie!

I love kitties, but we can't have one. Our dogs would eat it!

When I posted that pic I'm sure Hubby said "Yes we are going to buck that bull!" He's almost to big to fit in the chute and he will be on the ranch that's an hour and half away. So sadly, his only duty is to love the ladies!

We have a cat and our newly adopted Jack Russell wants to make he life hell.......poor Kitty!!!!

Ahah one place I work has a miss kitty. We also have a tom cat named matt damon.

Nothing like a good barn cat! That one is really cute, great markings! Smart, too, I love how she got on the ladder to stay away from the dogs!

I need a barn for my cats! Right now they are banished to the garage and aren't very happy about that!

Well she is definitely a pretty barn cat!! She looks content perched high on the ladder LOL!!

Your kitty is so pretty, love her color. I miss my Sammy so much. I'm thinking of getting another kitty. Sorry Ed!! :):)

Cats are masters of the "drop dead!" look, aren't they!

She has the look of all cats: like she can't be bothered! :)

My cats name is Miss Kitty too. Aren't we original.
Love the pictures.

She sure is sweet looking, I love the look on her face!! We had a wonderful barn cat until my inlaw's dog bit off her tail. Now she lives at the neighbor's house. I don't blame her for not wanting to come back. I wonder why it is that dogs don't like cats??

I always have to laugh at our barn cats that can be as uncomfortable as all get out and still look like they are to be worshiped by any dog that passes by. Cute cat.

I just love that distainful look on her face! Classic *cattitude*!

She sure is a pretty little thing. :-)

I miss having cats..but I have to pick which battles to fight. Fun photo's of the dogs in the hay!

I think every barn needs a kitty and she seems to fit in just fine. Your dogs crack me up!

She is cute, I love barn cats! She does look like she has an attitude. It is funny how she climbs the ladder to get away from the dogs!

She is a beautiful cat! Miss Kitty, love the name! Doncha suppose that someone could build her a perch that is just a little wider than the ladder..just a suggestion...since she is in the barn catching mice and earning her keep and all! :)

That's funny...you and TW were definitely having a meeting of the minds! Great lil' barn kitty, and a barn isn't a barn without a cat!