Looks Can Be Deceiving 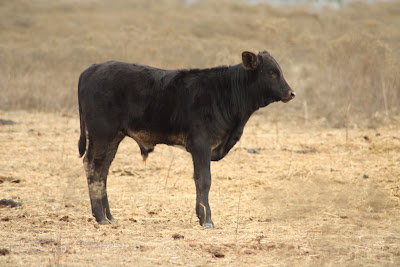 This is the youngest calf we have on the place right now. He's a little bull calf. And he looks pretty cute. The husband just loves him. Well, I on the other hand, am not quite as fond. I told the hubby this little man is pretty wild. Every evening when I feed, he runs crazy. You'd think after awhile of doing the same routine, he would simmer down. But nope, we go thru the same ordeal every night.

Sunday we sorted our bull calves and heifer calves. Of course, this little man and his mother were in the mix. His mom, Mudpie, knew to go on out when we gave her an opening but this little fella only saw mass pandemonium! I was in the pen with him and the other calves while the husband worked the gate. First, the idiot ran straight into the panels sticking his head thru and proceeded with a walleyed fit. Then he decided to come after me, not once but twice. The little turd. The husband said he was actually worried about me one of the times. Isn't that sweet. But I used my best shake and bake moves to get out of the way! We finally managed to get him out of the pen and into the pasture.

Doesn't he look like he has a bit of an attitude? 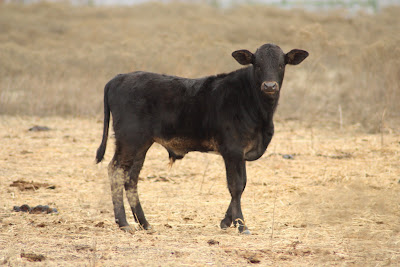 Oooooh yea he definately looks like he has a bit of sass. Too bad you don't have a video of him runnin around, I'm sure that would be comical.

That little guy defines "Heads UP"
All he needs is a party hat!

Lacey Jo-Yeah, video would probably be real funny! Especially when the lil sucker came at me.

Fernvalley-maybe I'll suggest that to the husband as his name.

Wow he sounds like a special one. Maybe he needs a helmet?

Turd fits him though.

I suppose you want them with a bit of attitude...but not to the point of plum crazy though? I'd be calling him more than a Turd ;~) Be careful!

Jamie & GTYYUP- Yes the name I was calling him on Sunday was not as nice as TURD!

Girl, you be careful! He is really cute, but you and I know that's really deceiving! And yeah, attitude, definitely.

Hmm...well...maybe he will turn that attitude into "Greatest Bucker of All Time"? Who's his daddy?

A bit of a attitude?

That little one, has tons of attitude.

Spookitude, I'd call it! Glad you are okay!

I would call him 'ONEEYE" because you have to keep one eye on him at all times. ;)

I think he's a cutie pie! Attitude in bulls is good, right?

That little guy is going to be BIG trouble when he grows up!

Think I might just call him Sassyfrass! He looks like he's one of those "with a plan" iffn' you know what I mean. You'd probably do well to keep your eyes on him. I haven't been here in a while and got caught up on your last few posts. Enjoyed today's post and the pics of Minnie and Pearl - those two are so danged cute!! And that new puppy...he's adorable!! Just wanted to stop in and say hello.

He just knows that he's adorable, so he's strutting his stuff!

Now that's what I call attitude!
He's got a sweet little face, but you wouldn't want to turn your back on him, lest he has a go for your hiney!

Chase ya one more time and I'd call him HAMBURGER!

Definitely has the "wild eyed" look. You always know those kind. We were doctoring a couple of our little ladies Sunday a.m. and one of them has the same look. She means business---she wasn't into medicine...in fact DH was not happy when he stuck her with the needle and she tried to jump the gate and wasted a whole shot of antibiotic. As my youngest boy said, "I bet dad had colorful language!"

I'd say a typical male of the species, never turn your back on a turd;)

I just don't understand y'all. Everyone should be drooling over this little stud. He's got the looks, build, attitude, pedigree and yes even some brains. He kinda reminds me of myself. Ha,Ha.
Even a little hot tempered at times.
His name is either gonna be "Black Mud" or "Black Dirt". His mother is Mud Pie and we also have black dirt here where we live. It can be hard to get used to but, it's suppose to be really good soil. I've been very frustrated at the soil many times.

I think he's just showing off for the wife. You know how those little studs are. Hek, he was probally just checking her moves out.

paintsmh, the dam is a white sports coat granddaughter and the sire is a gunslinger grandson.

He reminds me of one of my children. There's potential there.

He's definitely striking a pose! You can tell he just knows he's a studmuffin.

And I was drooling before. Just looking at him. He already has that I'm a darn sure nice one look. But now...ohhh Gunslinger on White Sports Coat...ohhhhh what a cross!!!

Send him to become a bucking bull. Those bulls always have lots of additude!! He is quite the looker!!

ROTFL!! Like hubby said you can look at him and see what he is thinking! He is going to get even! :O ROTFL at the hubby's comments!

I was reading Pioneer Woman one day and she was going on and on about this beautiful black cow that she was taking pictures of while she was in the shute. The whole time I was thinking that cow is so wild. Her eyes just had a crazy look. Sure enough she posted the next day and that beautiful black cow went after Malboro Man. I knew it just from looking at her crazy eyes. :)

You should be as proud as he is! i love black cattle!

Were you out there practicing with a red cape..for the "Running of the Bulls" this year?