We had lots of dealings with the bulls this weekend. Saturday evening as the husband was pulling in the drive, he saw our yearling bull, Stubby, jump the fence into the cow pasture. He thought he needed to strut his stuff with the girls I guess.

Here's Stubby....the pain in the rear. 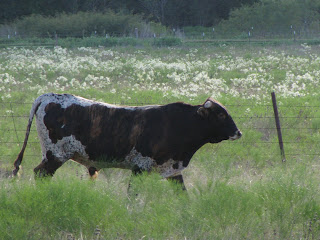 The husband and I called the cows up and attempted to get Stubby back where he was suppose to be. I stood at the gate, trying to keep the other bull, Death Wish, in as the husband tried getting Stubby out.
Here's Death Wish....Mr. Attitude! 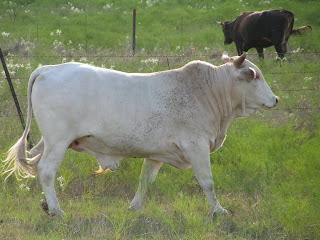 Well, I went round and round at the gate with Death Wish and the husband had the same luck with Stubby. Finally, it concluded with the husband throwing his cap to the ground and yelling a few expletives. And if you know the husband, that is the usual outcome! So I decided I should give it a try. I went out amongst the cows and calves in an attempt to herd Stubby back. After chasing him around for a bit, I finally got him towards the gate. We managed to get him and two cows out. Then we sorted the cows back over. Success!
On Sunday, we decided to pen the bulls up close to the house and let the cows into the top pastures. I was in the pen when the husband sooked the bulls up with cubes. When I attempted to leave the pen, Death Wish thought it would be fun to come at me. At which time I decide it best to run. The husband is standing at the gate with a funny look on his face asking "Why you runnin'?" About that time, Death Wish rounds the corner. Then the husband yells, "Get up the fence!" I scramble up the fence and luckily Death Wish stopped. He didn't want me too bad. Then I thought, the husband was at the gate, why didn't he just let me out? Hmmmmmm.
After my escape, Death Wish needed to take out his frustrations. So he went postal on the hay bale. 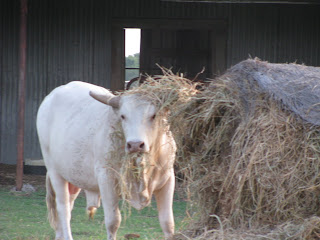 But I'm good with that.

LMAO!! You go Cowgirl! Or should I say Bullgirl!! Cows/bulls are the most difficult sometimes! Ok all the times! We have 10 roping steers! Sometimes they get out! each one will go a different direction when we try to put them back! I am glad they didn't eat you!!

Love the post! LOL! Came over from Train Wrecks's blog! Love it! Bulls, just have to love them! UGH! Glad he took it out on the hay bale and not you! Will be stopping back in!

the husband just read the blog and laughed. he said he didn't open the gate for me cause he couldn't let death wish out! His other remark was, "your leg wasn't broken, you could climb a fence!" isn't he sweet!